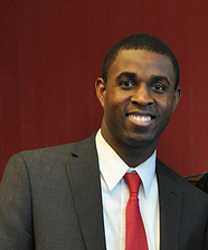 As a MLS Cup Champion, three time Collegiate Soccer All American, National Player of the year, and Academic All American.  Pierre-Louis scored 101 goals in 69 games at Lee

university. The Haitian Soccer Star holds the all time scoring record at Lee, his jersey number 19 was retired and Pierre-Louis was inducted to the Lee University Hall of Fames after his career.

Ricardo was drafted in the  second round (22nd picked) by the Columbus  Crew  in the MLS super draft.  He was part of the Crew team who won the 2008 MLS Cup, as well as the Supporter Shield Cup.  Ricardo also played for the Haitian National Team for 9 years.  He had 48 caps with the senior national team.  He has played in major tournaments for Haiti like the Gold Cup, World Cup Qualifying, and the Carribean Cup. During his time with the Haitian national team,  he had the opportunity to play against the world's best soccer players, like Landon Donovan, David Beckam, Ronaldinho Gaucho, and Ronaldo Luis Nazario.  Ricardo's most cherished soccer moment was playing against the five-time world cup champion Brazilian soccer team.

Ricardo started playing soccer at age 3 in the streets of Leogane, where soccer was the only way out.  Two years later, the local club youth coach invited him for a trial with the academy and that simple act changed his life forever.  He never stopped playing, and after moving to the U.S, Ricardo developed an interest in youth soccer coaching.  For over 12 years Ricardo has touched the lives of countless youths of various ages through the beautiful game of soccer.  Pierre-Louis is US Soccer Federation "B" coaching license certified, he also the Boys Head Coach at BIsmarck High School.

Ricardo's Soccer Programs are ways to help the youths in North Dakota develop a love for the game by encouraging an active lifestyle from a very young age. His goal is to develop kid's traits of respect, humility, listening, empathy and caring.

Soccer changed Ricardo's life, and his commitment may do the same for your child.